This Theosophical text is also an offering to the readers, they may appreciate it or put it aside for later times.

Mahatma Morya was the head of Shamballa, the planetary head centre. He ended his very long stay in service to humanity on planet Earth, by his own admission, by higher decree (there is always a higher authority) some 70 years or more ago.

In Helena Roerich’s diaries on the Agni Yoga teachings, she records his remarks on this subject. The quotations used here are a direct translation from the original Russian text using the software deepl.

We give this text with respect, gratitude and loving understanding.

In the chain of globes on which earthly destiny and evolution develop, the present globe has fallen into a very precarious condition. In the following text from Helena Roerich’s letters, she summarises the conversations with M. and gives an outlook on the future.

It speaks of a possible “explosion” of the planet. We supplement this term with that of “implosion”, which we use for a planet that is slowly becoming uninhabitable, whereby this process seems to be accelerating exponentially.

Helena Roerich writes in Letters to her fellow campaigners:

“Certainly, the Lords of Light are taking every measure to save the planet from this terrible fate. And if humanity chooses annihilation, its better part (and are there many such?) will be taken over to the higher planets. The average will go to another planet similar to our own, which will be nearer the earth if the explosion takes place.  (This new planet is not yet visible.) As for the rest of humanity, they will follow the Prince of the World and be exiled with him to Saturn. But oh, no one realises what a delay in evolution will take place for the majority of our earthly humanity in the event of the destruction of our planet. How many ages will have to pass before the new “earth” will be able to create suitable bodies!”

So, at a certain point in time, three differently sized groups of spirit souls, joined by their mental and astral creations, may set out on the clearly forked path if planetary life cannot be sustained.

The third larger group will make its way to Saturn, whose development is spiritually and ethically below the possible level of the earthly. There the dark ones and their followers, together with those who naively and ignorantly follow them, can let off steam. For the masses there remains only the waiting for a new, luminous impulse in the future, into whose attraction they can voluntarily give themselves, but only if they combine it with renouncing some ugly habits. For the “naïve”, salvation is possible through such an impulse. The period of time in which this could take place is immeasurably long for the current physical sense of time.

A middle group, endowed with ethical knowledge astrally and mentally, but still predominantly passive in the real actions to save the planet, will be given a further opportunity for development on a new, condensing planet. Of course, a differently structured physicality will develop there. Again, spiritual beings will guide and accompany the development process as brotherhood. In preparation for the possible development in this direction, Mahatma M., together with a small group from his ashram, has left the earthly and is working responsibly and creatively on higher levels to condense this planet. The result of this is an advancement in the spiritual hierarchy, especially in Shamballa. Mahatma Koot Humi has, as announced by M., taken over the leadership of Shamballa.

The third, very small group migrates in the solar system on subtle paths to the planets that suit them and, depending on the spiritual will, returns later to the new globe to supplement and support the guiding brotherhood there.

What is to be learnt from this threefold division is that no soul is lost and none is left out of the necessary karmic balancing of its deeds in the future.

“The Masters have concentrated their consciousness on the Earth, for the condition of the Earth requires an unheard-of doctor – the planet is sick, and if it cannot be moved, it would be better to take it temporarily out of circulation – perhaps like the moon.”

1. gave some communications in H. Roerich’s diaries announcing and explaining his “migration”.

“Only a few know of my passing. Exceptionally pure spirits are aware of the fiery union. They know that the Great Spirits cannot continue to create without the great fiery power of the Cosmic Fiery Union.” (Diary, 1939)

– Who are the lucky ones, how envious are they?

– There is no reason to be envious of ourselves.”

“We need (are needed) on another planet – rejoice!”

“Many things on this planet seem insoluble. If insolubility is a spirit leaving the planet, the phenomenon in the cosmos is asserted as an intelligent action – yes, my Urusvati, many mysteries in the cosmos!”

“- Sir, will your move to Venus mark the beginning of the New Circle (the New Round)?

– But how long will it be between the two circles?

– We have no time, and we may make a visit to the fire world in between.”

“I’m working on my legacy.”

“Then Our departure to the higher and greater worlds.

You have rightly pointed out that Mahatma Khut Humi is my successor.

Yes, the Lord of Shamballa will go and say that he has built with a fiery molten heart.” (Diary 39)

“The coming Venusian globe of this “ground plan” (of the Earth).

This refers to the preparation of the “new globe” which M. will “accompany”.

Not all relevant quotations are listed here. Those presented should suffice. We deliberately omit many very “personal” aspects in some quotations, which are rooted in the community of M. and Helena Roerich.

Accordingly, there have been shifts in the brotherhood. The reason for M.’s “migration” could be his particularly complex relationship with the “fallen angel” Lucifer (one of the original Kumaras), against whom he positioned himself as a strong bulwark after Atlantis. In the above quote, “there seem to be many things unresolvable…”, this is possibly implied. M. points out to Helena Roerich that their common path leads into areas that L. cannot affect. M. can still be reached there by means of fiery thoughts. Fiery thoughts are those that place the common good above the personal and are saturated with sufficient knowledge of the timeless comprehensive teaching. This also brings to mind the warning at the end of this article. There is no easy quick course “Theosophy in 10 days”. It will always be a matter of a sound knowledge of the accepted teachings so that there is a basis for the fiery thoughts.

To what extent the gap left by M. can be filled is not possible to discuss at this point. Whether a fundamental decision of the Brotherhood can be discerned in this process or whether an expectation of the future is expressed is left to the interpretation of current world events. It seems to become essential what influx the small group of wanderers and the larger one for the new globe can still receive. The stronger this influx is, the more the small chance of a reversal and salvation for the existing planet grows. The contents given here can help to be a bridge for both paths.

During the hours of greatest distress of the struggle on the superphysical planes, which then resulted in the world war, M. says to Helena R.:

“There is no reason to believe that We have decisive control over everything, both on earth and in heaven. We too are on a painful search for the best combination, and that is why we are so grateful to those who help us.”

“He who helps the Hierarchy spiritually is on the great path!”

WARNING: The inflation of ever new Masters on the Internet, the so-called “ascended Masters”, is a harmful illusion. The Brotherhood continues to be constituted in the form presented by the Tibetan through Alice Bailey. Yes, it is exhausting to read extensive books, and it seems too tempting when websites offer beautiful illusionary pictures in the most splendid colours. Of course, right next to them there are also dainty little bottles with miracle waters that are supposed to save real study. Living thought does not arise from these droplets, it remains with an astral illusory world without a real background. Thus, there is little difference to the images of saints, through the purchase of which one can supposedly free oneself from sins.

We remind you of the mantram for application! 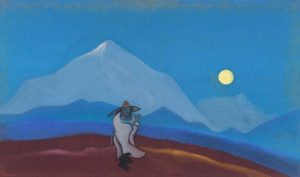 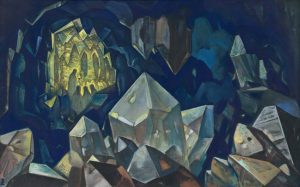